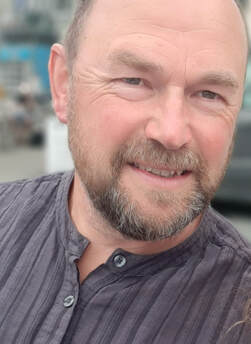 Always a tough one - to write about yourself.

​​I was born in Solihull, England and spent my first 20 years on this planet going to school and then working as a computer operator before becoming a programmer. Then I moved to Gloucester, worked in London, and now live near Bedford. I'm married with two children (one of each, both in their 20s).

​I've played many sports since I could first walk including cricket, football, swimming and running, and obtained a 2nd Dan Karate black belt quite some time ago.

​I'm a teacher of The Alexander Technique, an athletics coach, and I love to read and write.

FICTION: I love books that take me into the lives of the characters and make me believe I'm in there with them, experiencing the joys, woes and dilemmas. I love books that make it seem real - even if it's set on a fantasy world on the other side of the universe. I have to know some of the history and why the people in the story do what they do.

I don't like books that suddenly wrap everything up in the last few paragraphs that make you think the writer suddenly got bored and wanted it finished. So I hope you don't feel cheated by the endings in my book(s). And I soon lose interest in stories that have little back story, or no obvious reason, for a character doing something. So again, I've tried to not make that mistake with my stories.

NON-FICTION: I've always enjoyed books about history, especially ancient Greece and Rome, and often with a military slant. On my bedside cabinet there's usually a popular science book on subjects ranging from outer space down to the inner space of the human mind, performance and the structure of atoms. I hope one day to understand thirty percent of what I read :0)

I first wrote short stories in my early twenties, and although I've long since lost them, I can still recall most of the details as if I'd done them yesterday - in fact, a few ideas I had back then surface in my first book, Sky.

I've written three non-fiction books on sports training: The Performance Paradox (1998), Zone Mind, Zone Body (2005) and Golf Sense (2010). These have been well received, but I'd always wanted to write a full-length novel.

I finally sat down with a plan in 2010 and was really pleased when I managed to finish Sky in 2012. After receiving a number of pleas (there must have been at least half a dozen!) to write a sequel, I shocked myself further when I published Stargazers eighteen months later.

Not satisfied with a two book series, I set myself the goal to write a trilogy. I started the first book in 2014 and the project slowly took shape and turned into the dystopian adventure, The Never Dawn. I waited until I'd finished the second in the series, Cloud Cuckoo before publishing both in 2016. The final instalment, The Gates of Dawn was completed and published in August 2017.

Currently I'm working on a fantasy series, 'Song of Echoes'. I have completed 2 out of the 5 books I plan for the series, so at a rate of one book a year, I've got a few to go!

When I re-read my early attempts at writing and even my first two novels, it became obvious the authors I'd read in my late teens had a huge influence. These were John Wyndham and Arthur C. Clarke. In fact, I discovered Wyndham was born only a few miles from where I was brought up in Solihull.

Later, along with half the English-speaking world, I read Tolkien's Lord of The Rings, quickly followed by The Silmarillion  and just about anything else JRR had written including his shopping list. More recently, I find the space opera style of Alastair Reynolds intriguing, plus his short stories are superb.